The well-documented decline of the newspaper industry, combined with the enduring popularity of city living, is having one unexpected consequence: reinvention of the urban areas these old media companies once inhabited.

Take the northeast corner of Boston’s South End. In the 1950s, store-laden blocks were razed to make way for industrial structures, including the headquarters for the Boston Herald Traveler newspaper, which ultimately became the Boston Herald. In 2012, the Herald moved to the city’s Seaport District, and the neighborhood has been revamped into Ink Block, contemporary residential complexes peppered with cultural, culinary and modern day enterprises, including the city’s first co-living residence, which is slated for completion later this year.

Other cities are also seeing the value of urban real estate exceed the economics of operating a daily newspaper. There continues to be strong interest in the physical footprints of these entities, often for their proximity to meaningful city points.

In the case of the former site of the Tampa Tribune, the area has been radically transformed from a stubby, visually humdrum media complex into new and sleek waterside residences. When the Chicago Tribune offices relocated to the Prudential Plaza complex overlooking Millennium Park in June 2018, developers began converting the building’s interior infrastructure not into chic co-working environments for new swells of office workers, but upscale living spaces for busy Chicagoans and their families.

Some developers have taken advantage of the locale’s history and used the newspaper association to help forge a media brand identity for their projects.

In 2012, after 53 years in the South End, the Boston Herald was relocated to the city’s Seaport District. In 2017, the Herald filed for bankruptcy protection, and was acquired by Digital First Media the following year.

In what once was an urban desert is now Ink Block, a sprawling 7-acre mixed-use residential, restaurant and shopping destination. A popular outdoor park, Underground at Ink Block, draws crowds for its street art, bike paths and seasonal festivals.

“I am fond of saying that there was sagebrush rolling down Harrison Avenue before we started. It was a gritty, somewhat unsafe industrial neighborhood with no residential presence,” said Ted Tye, managing partner of National Development, the development firm behind the Ink Block project.

Among the seven structures are three apartment buildings, totaling 315 rental units starting at $2,700 a month which feature floor-to-ceiling windows, in-unit laundry and stainless-steel appliances, according to National Development. The Sepia and Siena buildings, 153 fully sold condominiums, sit contiguous to 7Ink, the city’s first co-living dwelling featuring 250 micro-studios and shared suites. The 205-room AC Hotel, a Marriott property, is also part of the complex.

According to Mr. Tye, the Ink Block name refers to the site’s heritage. “People like to live in places that have their roots in history—it is definitely something that distinguishes Ink Block from its competitors,” he said.

The most noticeable traces of the site’s newspaper heritage are in the public spaces of the rental buildings and in the 50,000-square-foot Whole Foods Market, which sits on the imprint of the Herald’s former first floor. Within one area, old type trays are fashioned into a decorative wall. The Herald’s original sign hangs in all its glory above the market’s craft beer aisle. 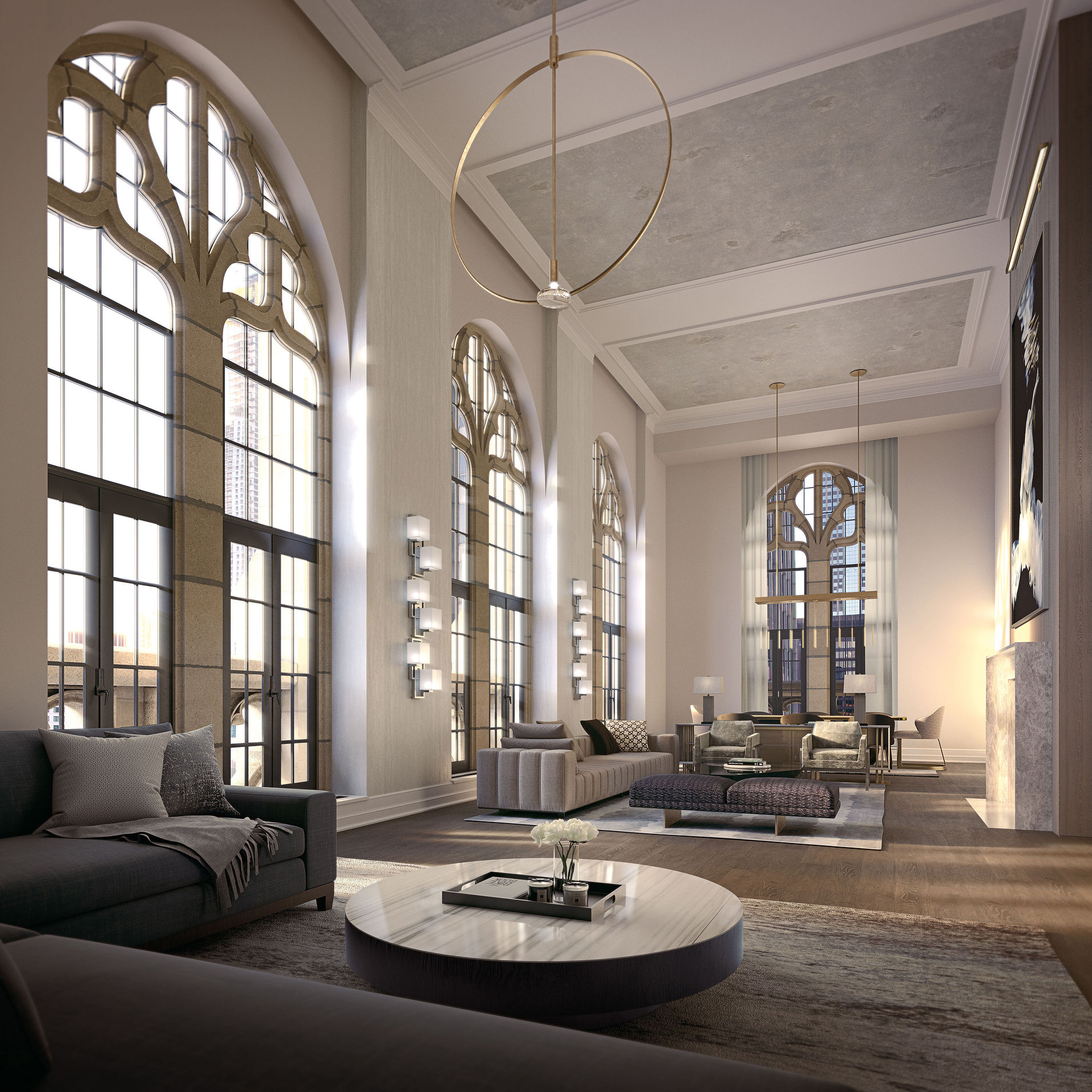 A rendering of a living room in Tribune Tower. ILLUSTRATION: TRIBUNE TOWER RESIDENCES

In 1922, the Chicago Tribune launched an international design competition for its new headquarters to spotlight its 75th anniversary, proffering straightforward instructions that it had to be the most beautiful and distinctive office building in the world, according to Chicago Tribune archives. Following the sale of the Tribune Tower in 2016, the newspaper vacated once its lease expired.

Now, the interiors of the iconic 1925 neo-Gothic Tribune Tower no longer contain the hustle and bustle of offices for the city’s long running daily paper, but are turning into 162 luxury condominiums selling for between $900,000 and $7.6 million. They will be ready for occupancy starting the first quarter of 2021, according to representatives of Golub & Co., a developer. 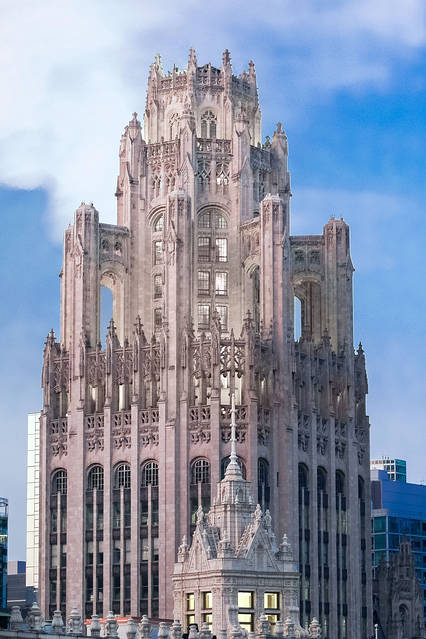 A rendering of the tower. ILLUSTRATION: TRIBUNE TOWER RESIDENCES

Golub along with CIM Group of Los Angeles purchased the riverfront property for $240 million in 2016. This began a monumental redevelopment plan that also includes the building of a 1,422-foot mixed-use high-rise northeast of the Tribune building—what’s to become the city’s second tallest skyscraper—supplanting the Trump International Hotel & Tower. Residential amenities will include an indoor pool, a golf simulation room, a terrace herb garden and a fitness center with spa luxuries.

Plans are in place to refurbish and reinstall the newspaper’s classic sign on the Tribune Tower, and other archival accents in the lobby, such as influential journalism quotes etched on its stone walls, will also remain, according to the developers.

One bedroom units start at 1,100-square-feet, with interior layouts featuring white oak flooring and quartzite kitchen islands, which lend to the modern aesthetic. The priciest condos, single- and two-story units which hover in the $7 million range, will be housed within the tower’s turret. 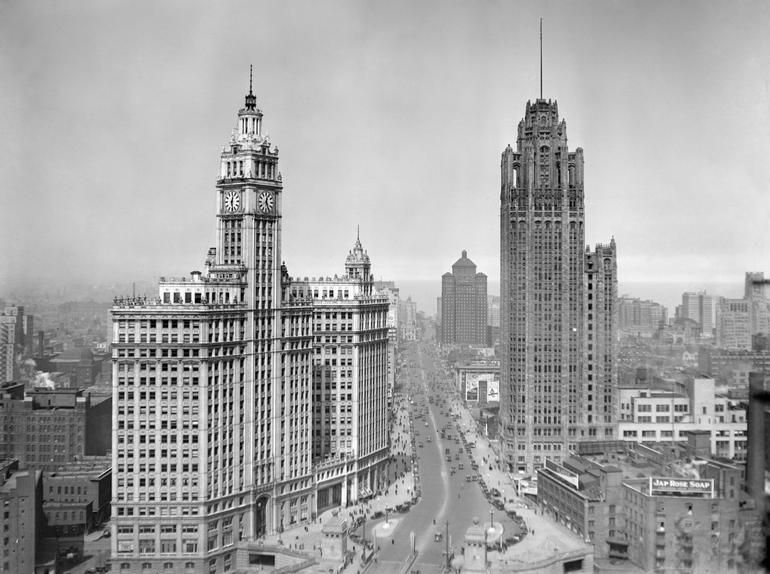 The tract of Hillsborough River along the west bank in downtown Tampa is cardinal to a local redevelopment plan already underway. The 4.2-acre plot held the former headquarters of the Tampa Tribune, operational for over 120 years before being purchased by rival media entity the Tampa Bay Times and ceasing publication in 2016. The building was demolished one year later to make way for Manor Riverwalk, a complex of 400 luxury rental units from developer Related Group. The residences are a boon for their walkability to the Tampa Museum of Art, Glazer Children’s Museum, and the city’s Convention Center, as well as the 2.6-mile long Riverwalk with its surfeit of water activities and dining options.

Studios in Manor Riverwalk begin at $1,646 a month and climb to $4,607 a month for a three-bedroom unit, said Manor Riverwalk representatives. The contemporary units feature quartz countertops, a full-sized washer and dryer as well as stainless-steel appliances and adaptable kitchen islands.

Little trace remains of the Tribune building that endured before. The only remaining artifact from the previous property was a grand oak tree meant to be relocated to the site’s meditation garden. “It didn’t survive transplanting,” said Manor Riverwalk representative Erika Taby. The tree was stripped and painted and turned into an art installation by artist Jason Middlebrook.